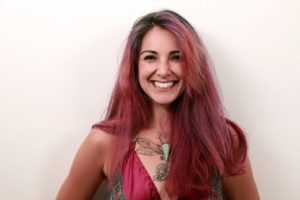 Almost The Greatest Gig On Earth keeps the dream alive with some of the country’s best tribute acts live onstage for a day-long celebration of the undisputed party decade: the ‘80s.

One of the tributes includes the magnificently talented 2007 ‘Australian Idol’ winner Natalie Gauci who has made a recent comeback to the music scene with her new single ‘Back To Life’, which is all about spreading positive energy.

Natalie will feature as the Queen Of Pop, Madonna for the ’80s recreation. “Because I was born in 1981, my influence from Madonna was more the ’90s than ’80s,” Natalie says.

“It wasn’t until I delved into ‘The Immaculate Collection’ that I had a good mix of her ’80s collection. ‘Like A Prayer’ is one of my favourites and ‘Material Girl’ was the one I used to sing a lot when I was really young.

Natalie is currently rehearsing for the performance and will be pregnant for the official showcase.“I’m going to be doing the Grand Finale right at the end, and that will probably be a full set of around five songs,” she says.

“I’ve been trying to Google Madonna’s pregnant shows, and I can’t seem to find any; it might be one of those things where it’s a surprise.

“We obviously have dancers, and I will be moving a little bit, but I can still exercise, I can still climb mountains and hike, so I’m not exactly rolling around at the moment. I’m not sure if I’m allowed to say which songs I’m performing, but I’ll give a hint that they’re all Madonna’s well-known ones.”

What started innocently enough as a search to curate a Spotify playlist for the greatest ’80s gig ever has bloomed into an exciting, brand-new festival for Australian music. Music industry icon Ian ‘Dicko’ Dickson serves as your master of ceremonies for an excellent adventure into the past in search of the ultimate ‘80s party playlist.

“Dicko and I have worked together on a few different projects after we met on ‘Australian Idol’. I ended up becoming a fitness trainer and ended up training him at one point.”